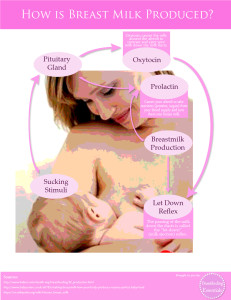 Many moms seem confused about milk production and wonder how they can ensure an adequate milk supply for their babies.

The truth is, for the majority of new moms, milk supply is not something you need to be concerned with. During pregnancy your body began preparing for lactation and has already begun the process of milk production. This stage of milk production is referred to as ‘Lactogenesis I.’ While not all mothers will experience breast changes in pregnancy, most will notice that their breasts become fuller, while their nipples become larger and darker during pregnancy. Mothers may also notice the formation of raised “bumps” on and around their areola, known as ‘Montgomery glands’.

Immediately following delivery, passage of the placenta causes a dramatic decrease in progesterone/estrogen/HPL levels. This paves the way for prolactin (the milk making hormone) to meet up with receptor sites and begin the production on breast milk. This stage of lactation is known as ‘Lactogenesis II.’ Initially, milk production is driven entirely by hormones and is an involuntary reflex – even moms who did not intend to breastfeed will notice they begin secreting milk soon after delivery.

Within the first few days after delivery, breast stimulation encourages milk production and research suggests that the more a mother’s breasts are stimulated during this critical period, the more milk production cells are “primed” for milk making. It is important that baby be given the opportunity to nurse immediately after birth and frequently (every 1-2 hours) in the days proceeding delivery to signal the initiation of ‘Lactogenesis III.’

In Lactogenesis III, milk supply and production becomes dependent on milk removal. Studies have confirmed that breasts fill up faster and produce higher volumes of milk when they breast is ’empty.’ For this reason, it is critical that nursing mothers nurse on-demand and do not limit time at the breast or ‘schedule feedings.’ Research suggests that mothers who nurse more frequently in the first few weeks after delivery will have greater success and ample milk supply compared to nursing mothers who limit or schedule feedings. Therefore, the key to milk production is frequent nursing. Mothers of newborns should expect to nurse their babies 10-12 times in a 24 hour period.

Nursing mothers commonly report that their breasts feel fullest in the morning. This is very common and can be attributed to increased proclatin levels during the early morning hours (2-5am). Interestingly, while milk production is at its highest during this time, breast milk is higher in lactose and lower in fat and protein in the early morning. As the day progresses, so too does the fat content of mother’s milk. It is believed that the higher fat and protein content of breast milk in the evening hours is designed to help babies sleep longer stretches at night. So, while you may notice that you have less milk in the evenings, take comfort in the fact that your milk is particularly creamy and rich in the evenings!

After the first 8-12 weeks, milk production becomes less hormonally-driven and is more dependent on demand (degree of emptiness). As a mother’s milk supply regulates to perfectly meet the needs of her baby, milk production is based primarily on the frequency of breast stimulation and degree of emptiness. In other words, supply equals demand. The more a mother a nurses, the more milk she will produce – it really is that simple!